You are here: Home / Acceptance and Commitment Therapy inspired weight loss / Everything You Know About Emotional Eating is Wrong 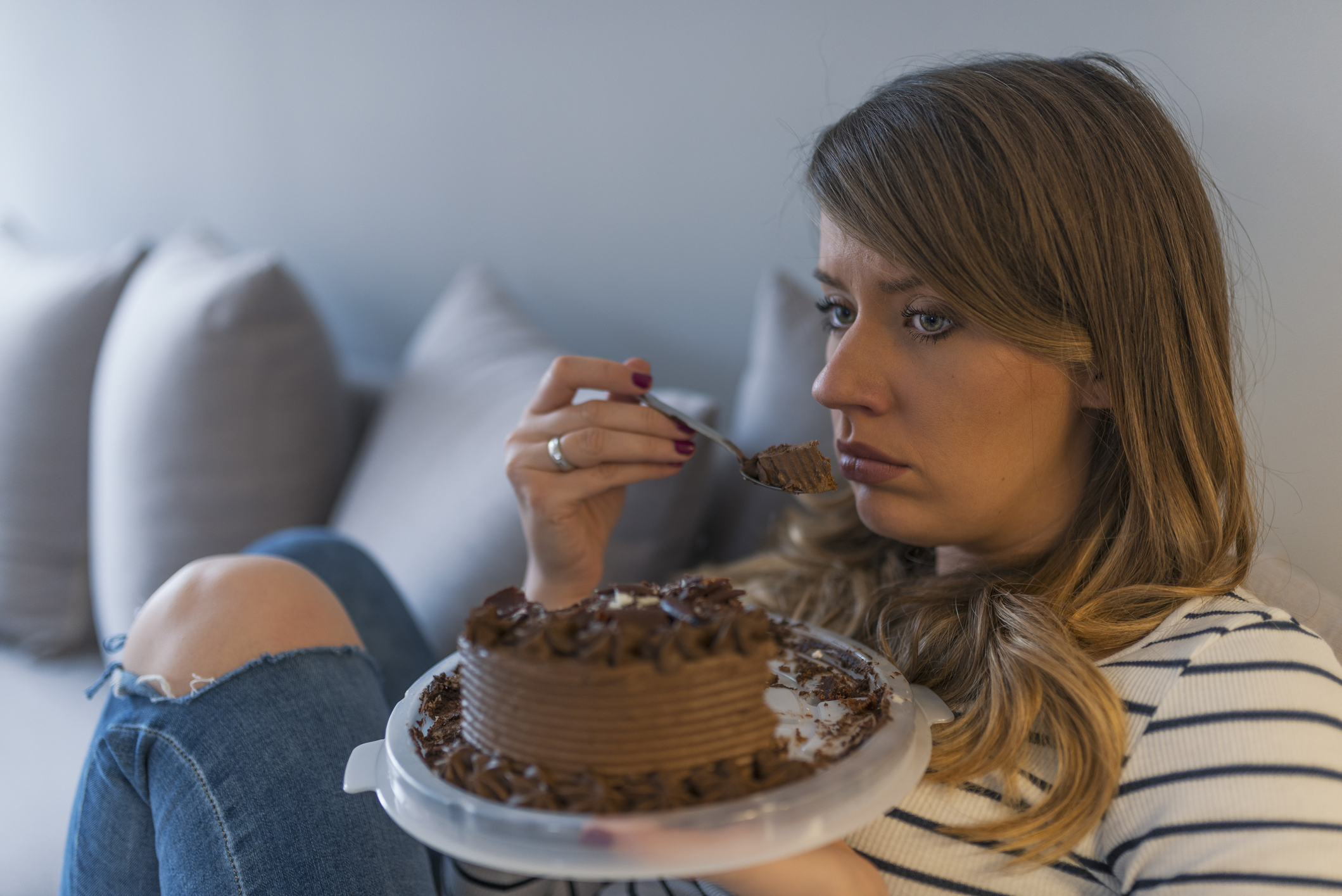 Emotional eating is a major driver of weight gain, and often is the major stumbling block for people in their weight loss efforts.

The most common story my new clients tell me, is of all of the times they got on a diet, lost weight, and then had a stressful or emotional event derail everything.  Something stressful happened, they emotionally ate, and then they were “off their diet” and had a major rebound.  I’ve talked to clients who have repeated this same cycle 10, 15, or 20 times.

It doesn’t matter how many times people have gone through this cycle of dieting, emotionally eating, and then rebounding, most people just look for another diet.  Ironically, what people often hope will fix their problem with emotional eating is an even stricter diet.

The “answers” that people often get from the fitness industry are usually things that have been found to relate to more emotional eating.

Control is the Problem, Not the Answer

Most of the answers that the fitness industry gives people who are trying to lose weight revolve around control.  The advice people typically receive falls into three categories:

Our society is obsessed with the idea that we can control our thoughts and emotions.  We’re often told we should be happy all of the time, that we should be able to change our thoughts to be more positive, and that we don’t have to think anything negative.  Social media makes it look like fitness influencers are happy every minute of the day.  Often, we’ll be given terrible advice from fitness celebrities that we should “think positive” or that the key is “good vibes only.”  The level to which we try to suppress our thoughts and emotions predicts our emotional eating rebound.[8, 9, 10, 11, 12, 13, 14]

Lastly, we’re often told that we should just white knuckle it through cravings.  That we should be able to control cravings, distract ourselves, or push them away.  Subconsciously, we think that people who have hit their fitness goals don’t have cravings.  In fact, personal trainers may tell you about the ways that they suppress their cravings.  But, for some reason, none of that works for you.[8, 9, 10, 11, 12, 13, 14]

Acceptance-based tools have been found to be really effective for people who emotionally eat or have intense cravings.

There have been several studies where they had people carry super delicious foods with them, at all times, for between 3-7 days. .[10, 11, 12, 13]  In most of the studies they used chocolate.  In other studies they used salty snack foods.  They also keep a diary of their consumption of these foods.  They split the participants up into two groups:

What they have found is this: Both groups consistently eat the same number of chocolates or salty snacks during the time they are carrying them around.  During the carrying, both strategies are the same.

When the participants came back, their chocolates and snacks were counted.  In most studies, the researchers secretly marked the candies so they could see if any had been replaced…  and usually a couple participants eat more than they reported, and bring a box back with a few replaced.  The researchers noted the ones that were replaced, counted what was actually eaten, and ignored their food diary completely.

Afterwards, the participants got a tricky test of the rebound effect: In one study, there were told they were doing a taste test of different chocolates, to see how the week of restriction impacted what they liked.  In another study, they were given a reflection to write, while there was a bowl of chocolates on the table.

The real study was this second part — seeing how much they rebounded.

In every study reviewed, the people who had used control strategies rebounded significantly more than the people who used acceptance-based strategies, eating up to four times more chocolates.

Thought Suppression Works for Some People and Not Others

One of the most fascinating things that we see in the research on emotional eating and cravings is that people fall into one of two categories.

Now, multiple studies are separating people’s eating and weight loss results, based on how they scored on emotional eating surveys or food inhibition (cravings) surveys.

We find something really, really important:

If You Emotionally Eat You Need Different Tools

The tools that the fitness industry gives you are all control strategies…  and they are all related to a repeated cycle of failure.  Likely, all of strategies you’ve read about, heard from friends, or even been coached on by a personal trainer, are the things that perpetuate this failure cycle.  For you, these strategies really suck.

It’s not your fault that the only strategies you have been given totally suck — it’s probably all you’ve ever heard.  Which brings us to our next point…

Control Strategies Work for People Who Aren’t You

The research is pretty clear that, for people who do not have emotional eating issues or intense cravings, control strategies work really, really well.

The strategies they used work for them because they don’t have any emotional eating issues.

Everyone has different strengths and weaknesses, everyone has different things that are easy and hard.  The biggest issue the fitness industry has is that most of the people who are giving advice are people who got into fitness because it was relatively easy for them.  I’m not saying they don’t work at it…  just that it’s the thing in their lives that comes the most naturally to them, that they are the most talented at.

On the flip-side, many of my clients are software engineers, lawyers, doctors, directors, or accountants, and have a million other things that they are good at, that personal trainers and fitness gurus suck at.  Fitness experts are really good at fitness, but they may need extra help with finance.  You may be great at finance, but need extra help with fitness.  That’s ok.

It’s ok for them to talk about things that worked for them.  And, those things really do work for them.  You just have to recognize that you are different from them, and you need different tools.

A few years ago, I read about a randomized controlled trial that blew my mind.  In 2013, researchers at Drexel university created a 40 week study, with 128 people, comparing two kinds of treatment[15]:

(does that look familiar from above?)

For people with emotional eating issues, the ABT group lost almost twice as much weight.

The researchers replicated the study again in 2016.[16]  This time they had 190 participants, and the treatment went on six months.  This time, the acceptance-based group averaged 35% more weight loss.

Researchers were able to piece out what drove more weight loss in the acceptance-based group, and found that:

Psychological flexibility is the skill of being able to have unwanted thoughts and emotions, and take actions that fit your values and goals anyway.  Autonomous motivation is being clear about your personal values, and connecting those values to the actions you’re taking.

Update: But How Does Acceptance Cause Weight Loss?

While there’s been a ton of great feedback and hundreds of people sharing this, one question I got really consistently was, “But how does ‘acceptance’ cause weight loss?”  Or, “If I just ‘accept’ things, how does anything change?”

In the Mind Your Health randomizd controlled trial, they had a mantra: “Accept what you can’t change, change what you can.”  Here’s what that looked like:

The people who lost weight in the studies: Increased vegetable consumption, gradually ramped up exercise, reduced snacking due to cravings, reduced emotional eating, reduced meal size, ate more balanced meals, and so on.  They made a ton of changes to their behaviors.

The Happiness Trap is probably the first one I would recommend — it’s clear, simple, easy to read, and people totally get it.  Steve Hayes invented Acceptance and Commitment Therapy, so his book is predictably awesome.  Kelly Wilson, PhD’s book is geared towards anxiety, but he’s probably my favorite speaker and researcher, I just really dig the way he writes about it also.

Again, start with The Happiness Trap, and if you dig it, maybe check out the other two.

But the biggest thing I wanted to you take away from this article isn’t a link to a book on Amazon.  I want you to take away that the tools you’ve been given to deal with emotional eating are totally inadequate.  You’ve gotten really crappy advice, and it’s not your fault.

When you hear people talk about control strategies, and you wonder why those never work for you, now you know.

Acceptance vs. Control Strategies for Emotional Eating and Cravings