You are here: Home / Habit Based Diet and Workout Hacks / Are Your Food Habits Too Small? 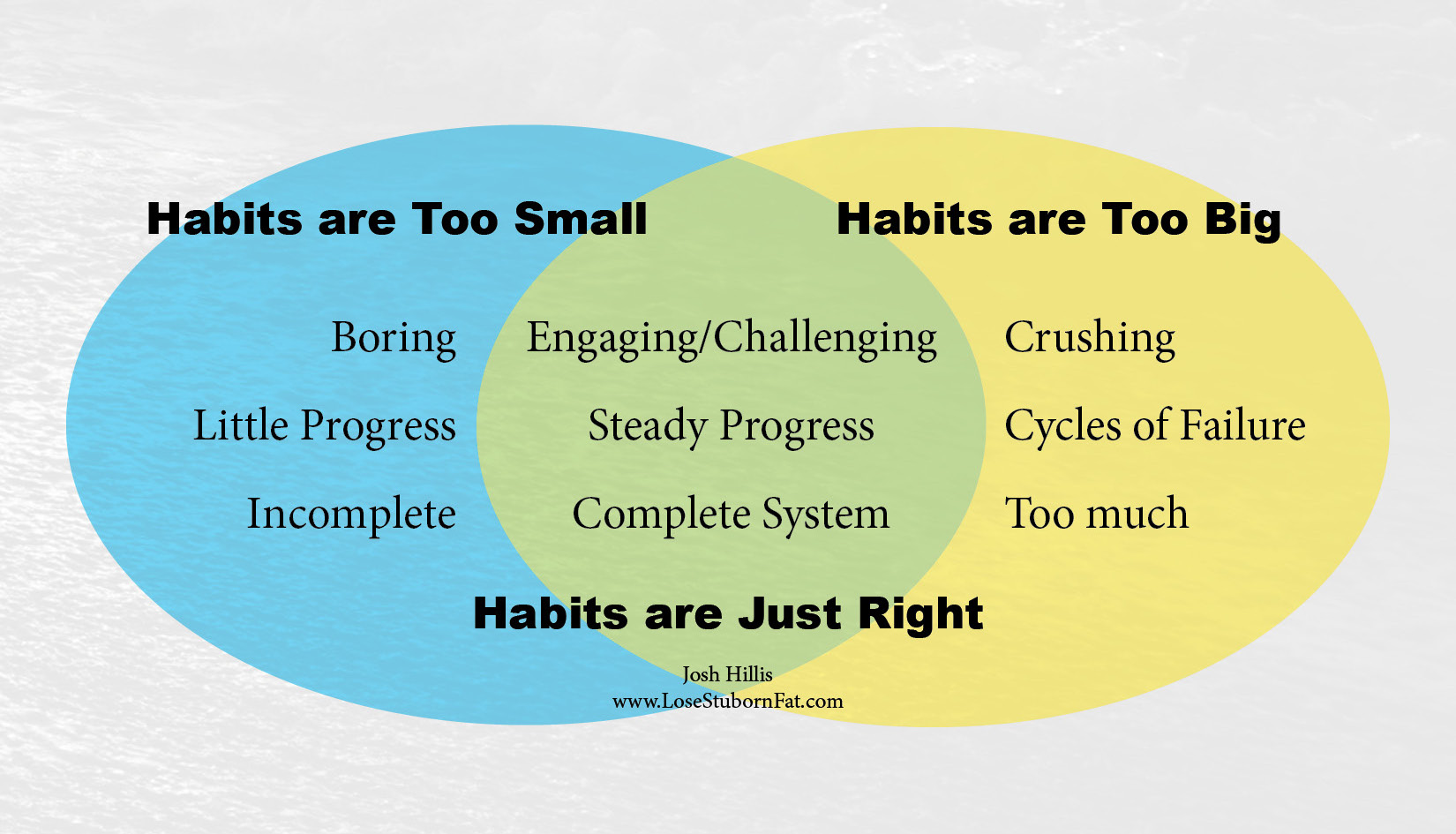 There’s a lot of talk now about doing really small food habits: Only one habit at a time, only at an amount that you know you can be successful at, until you master it.

I realize I played a part in spreading that.  Mea culpa.

I started promoting doing smaller habits and fewer habits seven years ago.  It made sense — it was a reaction to people doing too much.

Essentially, taking on a diet is taking on a dozen or more habits and skills, without properly ramping up.  I was trying to go the opposite direction of that.  It made sense, and, it actually did work a lot better than doing too much.

The issues with doing too much are known to anyone who has dieted before:

Most people who’ve dieted or taken on too much are really sick of the repeated cycles of failure they’ve had in the past.

If you think about a diet, it requires already being good at: Shopping, cooking, navigating social situations, handling emotional eating, handling stress eating, managing cravings, figuring out travel and holidays, sticking to rules.  It’s a lot of stuff, and most people aren’t good at all of those skills right out of the gate.

Worse, it might be significantly more skills than they’ll ever need.  It sets up a weird superstition about having to do everything.  It’s a gateway to really unhealthy and ineffective perfectionism.

They want something they can do well at.

This is a new problem, created by the current push to doing smaller and smaller habits:

Most people who’ve dieted or taken on too much are really sick of the repeated cycles of failure they’ve had in the past.  They want something they can do well at.

You can take one of my favorite habits/skills: Eating slowly

Working on eating slowly is an amazing skill, and it can be totally game changing for people — it can help people eat less at meals and it can help reduce snacking.  That being said, it works significantly better when combined with other complimentary skills.

First off, getting the right amount is more engaging.

A rule of thumb to shoot for is about 85% success with a skill.

You actually don’t want 100% success.  You want something to be new and challenging, such that you’re actually growing.  Also, you want to realize that doing something 100% of the time isn’t necessary.

If you’re doing a challenging amount of skill practice, it’s pretty normal to lose about 2 pounds per month.  This isn’t the screaming downward trajectory of The Biggest Loser, where people were losing 40 pounds per month.  But it also isn’t the snails pace of the scale never moving.  It’s ok to want, and get, regular measurable progress.

I make every effort to steer our focus away from the scale, or from measurements, or any of that stuff — it’s simply less effective to focus on.  People get much, much better results by focusing on habit/skill frequency.  It’s about focusing on doing things that work.  You’ll get great results by practicing skills.

That being said, if you aren’t getting any results, then something is missing.

Going back to the example of one of my favorite skills: Eating slowly.  It’s even more effective when it’s combined with other skills.

You’ll notice that the three skills above are actually a complete system for noticing when full.

A client starting off with those three skills together will be significantly more successful than a client who started off with only one.

The other, totally unintended benefit, of practicing multiple skills together, is that you don’t have to hit all of them at every meal, or even every day.  You can feel successful if you check off some of them.

On a day when they end up having their lunch break compressed, they can still add protein.  Or the meal that they eat at their friends house, they can still eat slowly, even if it doesn’t have protein.

It sets them up where they always have at least one thing they can work on, regardless of the situation.

Find a Spot in the Middle

All of those things are normal.  They game you want to play, is to pay attention to what that middle looks like each week. 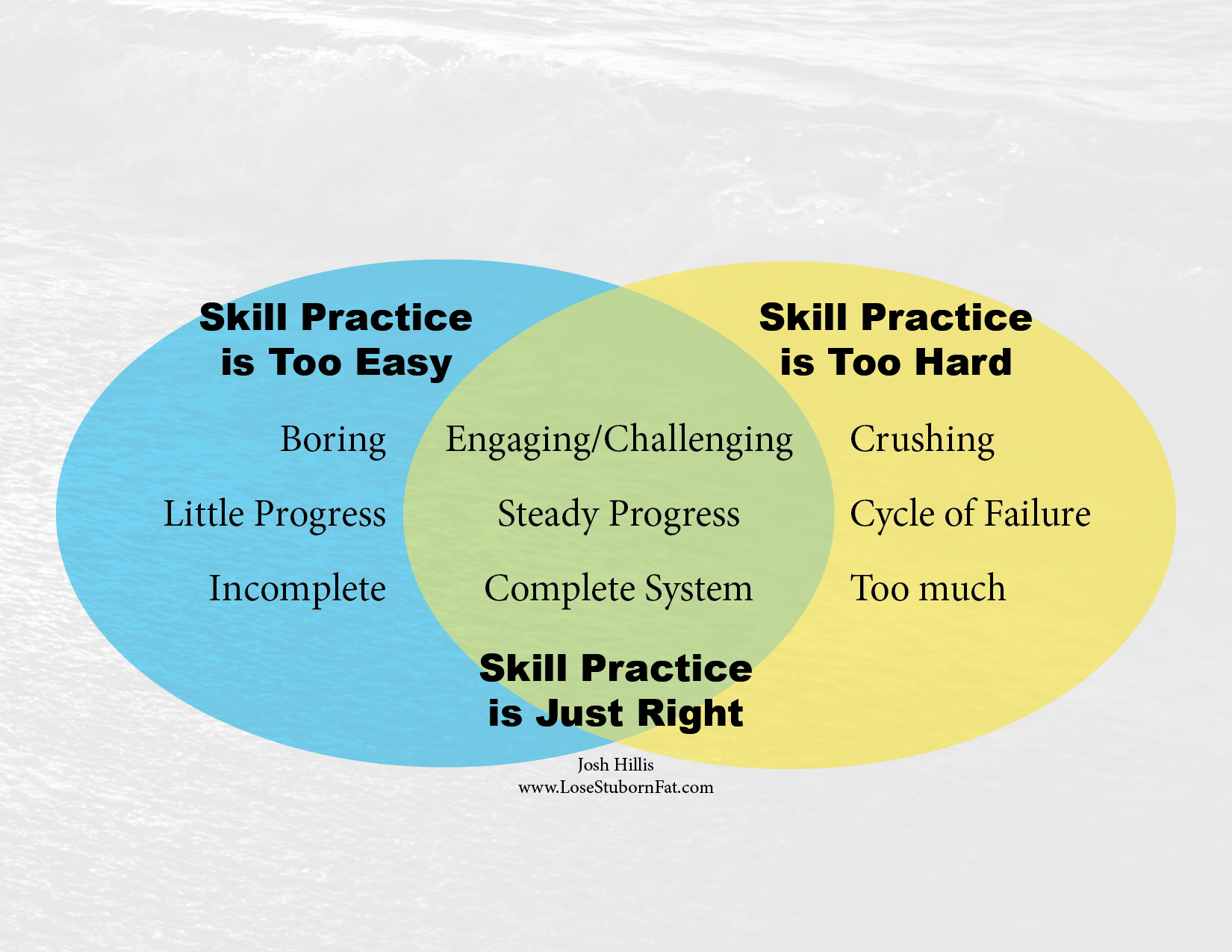 Skills Instead of Habits

You’ll find it’s much more effect to relate to these things like skills (in the gym) than habits (like brushing your teeth).

This article is titled about habits, because that’s become the way we’ve started to talk about it.  And, I think the diet perspective is less effective than a habit perspective, so that’s awesome.

That being said, food skills — like noticing you are full and stopping — are more like learning skills in the gym.  It’s like learning to do a kettlebell swing.

You can practice a kettlebell swing three times per week, and get better at it.  It doesn’t have to be every day.  Skills get better with practice.  Food skills are like that.

Eating slowly, checking in with your stomach, distinguishing between hunger and cravings — these kinds of things are all skills.  They get better with practice.  They even get better with intermittent practice.  Practice just adds up over time, you get better and better.