You are here: Home / Bodyweight Workout / Movement Progressions are Broken

I’ve always been a fan of movement progressions.  We teach one move, master it, then move on to the next progression.

In a weird way, the linear nature of how we think about progressions is actually forcing people into moves that don’t work for their body, which can stall progress or even give you repeated little tweaky injuries.  Or, people get so focused on “progressing” that they end up missing out on a much more effective workout that they could have gotten a step down.

We’ll start by taking a look at different kinds of progressions in workouts, and then we’ll finish with how you can get your absolute best workout.

Movement progressions tend to increase in complexity as you progress.  A kettlebell swing/snatch progression might look like this:

And that’s the basic premise of a movement progression: Each stage is increasing in complexity.

On top of that, you can make any stage easier or harder by increasing or decreasing the weight of the kettlebell.

So you have two different ways to progress: Complexity or weight.

For bodyweight exercises, they tend to increase in complexity and make your leverage worse — basically they are increasing complexity and “weight” at the same time.  For example: Using two legs in a squat vs. a split-squat vs. one leg in a pistol-squat, you increase both the complexity, and “weight” by moving to one leg. 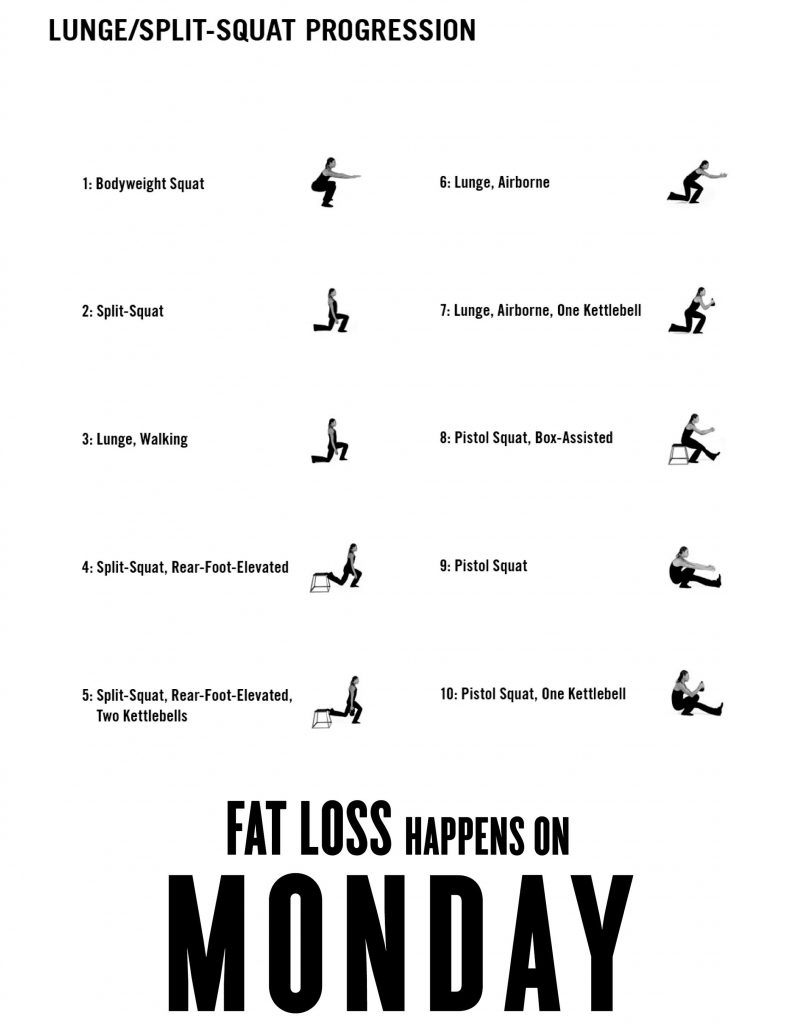 The split-squat progression above is another combination progression: The primary progression is complexity, but at any stage you could add weight and progress that way instead.

And that’s how I’d always thought of movement progressions in the past.  A straight line of progression, where ideally you always want to move up.

People start to treat the movement progression like it’s a belt-system in martial arts, and they always want to progress.

But there’s a much, much better way.

The problem with that is that there are so many times where you’ll get a more effective workout going backwards in the progression instead of forwards.

Variations Instead of Progressions

I stole this concept from the genius that is Seth Munsey.  If you don’t know Seth, he owns an amazing gym in Monterey called Iron Republic.

If you can start thinking about movements as variations, it opens up a world of possibilities.

I’ve gotten a zillion emails from clients who were super bummed out that on a higher rep phase they had to “go backwards”, but that’s totally missing the point.

If you do a 3-5 rep phase, you might be doing Rear-foot-elevated Split-squats with two kettlebells

If you do a 10-15 rep phase, you might be doing walking lunges

I want you to try to stop thinking in terms of “better” or “worse” or “higher” or “lower”.

Is This Move The Right Fit?

Any workout movement you do has one purpose: To make you better.

To get better, you need to do a movement that works for your body ON THAT DAY.

Some days you may feel great and skip to a harder movement variation.  It fits for that day.

Other days maybe you didn’t get enough sleep and are totally stressed out and feel like crap, and move to an easier movement variation.  And it fits for that day.

You may find that a certain movement variation hurts your body, even though the one before it felt great.  You know what — don’t do that variation.

None of this is rocket-science, but it does go totally against the prevailing wisdom in the industry right now.  I know there are MANY fitness gurus that deliberately turn their movement progressions into a “belt system” like martial arts.

Look, it’s just a fat loss workout.  Make each movement in the workout fit you, don’t try to cram yourself into some “magic movement sequence.”  Don’t let anyone tell you different: You can, and should, use whichever movement variation that fits for you.

Each movement in the workout should fit:

And don’t be surprised if you have the flexibility one day, and then another day you sleep wrong and you don’t.  That’s ok.  Do the dumbbell incline press that day.  Come back to military presses some other day, when you feel great. 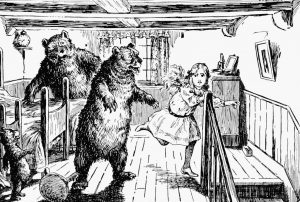 Momma Bear, Poppa Bear and Baby Bear all ate their porridge at different temperatures.  None of them was the “right” one or the “magic” one, none of them were really even a progression from the others, it was the one that fit best for them.

Goldilocks tried them all, and found the one that fit best for her.  And we’d all do better to do the same thing with workout movements.

The Client Who Did Zero Kettlebell Swings

I had a client who felt uncomfortable with kettlebell swings because of some previous injuries (that she had had physical therapy for, and was cleared to workout with now).

Instead of kettlebell swings, we did a million other things that she felt great about and fit her body really well: For strength she rocked all varieties of deadlifts, barbell hip thrusts, cable hip pull throughs, ball-leg-curl-hipbridges.  For interval training she rocked sprints, jump rope, and sometimes battling ropes.

She lost about 40 pounds over a year, hit all her goals, and did it with movements that fit her body.

Honestly, it had more to do with getting the food habits right than it did the magic workout movements.  We always got in a push, pull, squat and hip hinge, but which hip hinge didn’t matter at all, in the long run.

I posted the split-squat progression above because it seems like everyone wants to do pistol-squats.

And if pistol-squats seem cool, then by all means work towards them.  Because working towards stuff is fun.  The amount of strength and flexibility you’ll have to build to be able to do pistol-squats will absolutely make a difference in your fitness and athleticism.

But for the average person, who’s goal is fat loss, it doesn’t really matter if you ever do a pistol.

For fat loss, you’ll probably get better results by doing split-squats with heavy-ish kettlebells for 3 sets of 12, than you would “finally getting” that one shaky pistol.

In general, try adding weight or reps first.  Own the movement.  Get a great workout.

How Can You (Or Have You) Better Fit Your Workout to Your Body?

Give us a shout and share how you “Goldilocks” your workout!